Music is in my blood. I love to mix various instruments and elements of different cultures in my compositions. For me music is a language without boundaries, a meeting of souls, melodies and rhythms.
My Albums
Vinyl LPs

Ariel Kalma is the kind of musician that collectors live their lives to find at the bottom of a dollar record bin, and the kind who fellow musicians hope to become. He is a composer who worked on the periphery of a fringe movement, whose early adherents have recently seen an explosion in popularity...

I went and looked around your site and enjoyed your beautiful music... flute of the soul gave me tears. You have a big heart, complex heart, and you are generous. I see why you see your music should be free for the world to enjoy... You are absolutely amazing! 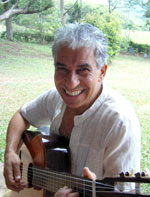 Ariel Kalma is inspired by rhythms, melodies and grooves from various cultures, ambient atmospheres, modal music, native instruments and nature. Ariel likes to experiment with music: mix traditional sounds with modern arrangements, use electronica and special effects, play circular breathing on winds and didgeridoo, create original sounds from synthesizers. Ariel blends styles of music to produce original compositions with flavours of his own. His songs touch deep feelings of the search for simple truth in a metaphorical poetry.

During his study of Electronics, Computer Science, Music and Art at Paris University, Ariel Kalma was also performing with several bands and touring the world, visiting Asia, Africa, Japan, Canada and Europe, always listening to, sometimes playing with, the music and the people: different scales, colours of sound, timing and rhythms.

Over 3 decades, Ariel Kalma published a number of vinyl LP's, cassettes, and CD's. His compositions have been used for modern dance-theatre, films, advertising, musical poetry, relaxation and spa music, guided meditations, compilations, transformational groups. Ariel Kalma has also played on many albums in France - even throughout Europe, the US and recently Australia, where he lives.

In the year 2000 Ariel created his own world-fusion compilation label: Music Mosaic.

Ariel Kalma in residency at the Old Carpet factory on Hydra, Greece, September 2019 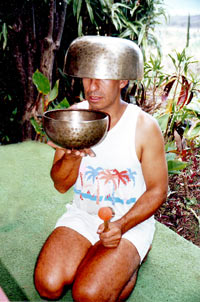 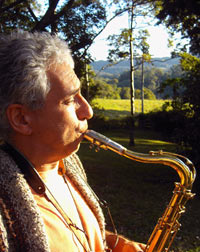